by geertjan — last modified 2013-04-24 09:51
Trade unions and labour groups in Bangladesh continue their call upon international buyers to ensure the compensation meets the needs of the families of the workers who died in a fire in the Garib & Garib factory in February this year. 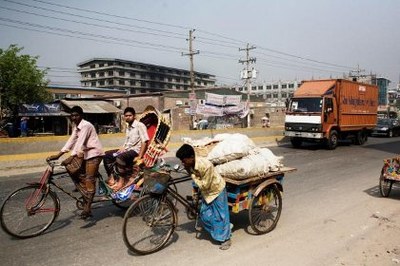 Almost four months after the tragic fire that cost the lives of 21 and hospitalized 6 workers, no compensation has been provided for the loss of income to the families concerned. Similarly the family of a worker who died in a fire at the same factory in August 2009 is still waiting for appropriate compensation.

The CCC welcomes the fact that the main buyer at the factory, the Swedish retailer H&M became involved as soon as news arrived that yet another fire in a Bangladesh factory took so many lives. The company developed a proposal for financial support to the orphans below the age of 18 years old, and parents who are not able to work due to old age. However, great concerns remain as the proposal does not cover  other  relatives affected by the loss of a breadwinner.

Other international buyers have not taken any concrete steps with regard to compensation thus far.

Bangladesh garment factories are notorious for their unsafe conditions, yet factory owners, the Bangladesh government and garment companies have thus far not taken sufficient steps to protect the basic rights of workers to work in a safe environment. The CCC and other international labour rights organizations together with the International Textile, Garment and Leather Workers Federation (ITGLWF) have called upon garment companies sourcing from Bangladesh to improve safety in the industry, and to ensure that workers can report and challenge health and safety violations by supporting the right to organize. The CCC and its allies are now discussing a collective approach with most of the major buyers from Bangladesh.

Background: three fires at Garib and Garib in the past year

On February 25 at approximately 9.30 pm, a fire erupted on the first floor of the seven story Garib and Garib factory, located in the Bogra area in Gazipur, Bangladesh. 15 women and 6 men died from suffocation, and 6 workers had to be hospitalized for a longer period due to smoke poisoning. According to reports from fire fighters, the fire was caused by an electrical short circuit. As the fire spread, workers became trapped on the floors above. It appears, from witness statements and press reports, that emergency exits were blocked, the front gate was locked and fire extinguishing equipment was either missing or inappropriate. According to one survivor, rescue efforts were further hampered by the fact that firemen had to cut the window grills to access the building and rescue the trapped workers.

This was not the only fire at Garib and Garib in the past year. On August 22, 2009, one worker and one fire fighter died in a fire that reportedly broke out in a storage room at the second floor. And after the major fire in February this year, another fire again erupted on April 13. This time the fire originated around 1.30 pm from the third floor and quickly spread to the second and fourth floors. At that time most workers of the factory that had resumed production since April 1, were out for lunch. However, at least 10 workers and fire fighters were injured this time.

In response to the fire, H&M has commissioned the NGO Save the Children Sweden Denmark (SCSD) to assess the needs of the nearest family members of the deceased workers, and the injured workers. The company decided to focus on the needs of the children and elderly parents, but not to provide general compensation based on the lack of income the family members would have expected until retirement.

The company reported that it has requested all its Bangladesh suppliers to review their safety measures. In addition, H&M reports that they have set aside 1 million Swedish Krona (approx. 105.000 euro) for fire prevention measures, in particular hiring experts on electricity safety and promoting fire drills and trainings for workers.

The moment H&M announced its intention to commission an assessment into the needs of the injured workers and relatives of the deceased workers, the Clean Clothes Campaign urged the company to consult with the unions and workers’ representatives about the minimal requirements of a compensation model. Although H&M local representatives visited some NGOs and unions to inform them about the planned assessment by Save the Children Sweden Denmark (SCDS), there was no inclusive process to negotiate the compensation model with  unions and worker representatives.

The main criticisms of H&M’s proposed compensation model, which focuses on the needs of children under 18 and elderly parents, is the following:

Other buyers at Garib and Garib

Other companies that confirmed production at Garib and Garib in 2009 and 2010 include the Italian company Teddy (brand Terranova),  the Turkish company Taha Group (brand LC Waikiki), the Spanish company El Corte Ingles, the French company Provera, and the Canadian company Marks Work Wearhouse. In addition there are records that the American company Ulla Popken also recently ordered at Garib and Garib.

The Clean Clothes Campaign, the Maquila Solidarity Network and the International Labour Rights Forum contacted these buyers in the aftermath of the fire. Teddy and LC Waikiki announced that they were willing to contribute to the compensation of the victims. However, no concrete proposals have been developed thus far. Provera announced that it was willing to help the families of the victims, but never informed us of how they would do so. El Corte Ingles so far has not given any response regarding compensation. Mark’s Work Wearhouse stopped production at Garib and Garib, reportedly because of the chronic safety problems, after the first fire in August 2009.  CCC calls upon these buyers to also as soon as possible confirm their attendance at the July 21st meeting.

Finally Ulla Popken never responded to calls, and therefore no other conclusion remains than that they are not taking any responsibility for the death of the Garib and Garib workers.

Action for safe factories in Bangladesh

To prevent further disasters in the Bangladesh garment industry, notorious for its bad safety record, the CCC, the Maquila Solidarity Network (Canada), and the International Labor Rights Forum (USA) have called upon all buyers sourcing garments in Bangladesh to take proactive, sustained, and coordinated measures to help eliminate these systemic problems.

In consultation with Bangladeshi unions and the US-based Worker Rights Consortium, and incorporating proposals developed earlier by the International Textile, Garment and Leather Workers Federation (ITGLWF), we have compiled a list of actions that companies sourcing garments from Bangladesh should take within their own supply chain to prevent future tragedies. We are also asking that companies to collectively press the Government of Bangladesh and the BGMEA to take specific actions to address these problems industry-wide in Bangladesh.

Most of the companies approached have responded to this call for action, and are currently engaging in discussions with our organizations regarding a collective approach to ensure that progress is made.