by geertjan — last modified 2013-04-24 09:51
The Clean Clothes campaign is very pleased that Somyot Prukasakasemsuk has been released, and wants to thank you all very much for your quick action and support! 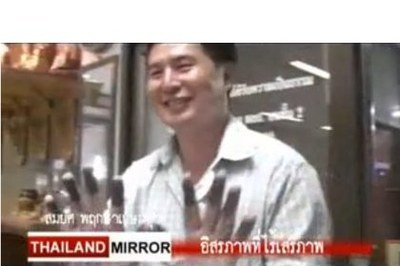 Somyot Pruksakasemsuk, was released sunday night, 13 June, from a prison at a Thai army base. He had been imprisoned since 24 May, together with academic Suthachai Yimprasert from Chulalongkom University, after the two presented themselves to police after they heard arrest warrants had been issued for them.

Yimprasert was released 5 June from a prison at the Adisorn military base in Saraburi, 115 kilometres north of Bangkok. Both were arrested under the government’s Centre for the Resolution of the Emergency Situation (CRES), a hastily put together decree stemming from May’s political turbulence in Thailand.

The release of Somyot follows a criminal court’s decision rejecting the CRES arrest order. Even after that decision, the government held him for another seven days.

The CRES charges against him were for inflaming public sentiment against the government for holding a news conference on 21 May in which he called for the resignation of Prime Minister Abhisit Vejjajiva. He also edited a newspaper that supported the viewpoints of the Red Shirts in recent political strife.

The Clean Clothes Campaign joined ICEM (International Federation of Chemical, Energy, Mine and General Workers' Unions) and several other human rights groups and global unions throughout the world in sending protests to the Thai government over the unfair arrest, and circulated an online appeal.

The Clean Clothes Campaign remains concerned about the fate of many other activists still held under the CRES provisions, which violate international human rights standards.