Garib Fire Survivors Call for Justice and a Safe Industry

by geertjan — last modified 2013-04-25 13:17
Following a horrific factory fire that killed 21 employees of a garment factory in Bangladesh, the factory workers are demanding swift reforms, a criminal investigation and compensation for the victims. Support these workers’ demands by writing to the Government of Bangladesh and international fashion brands sourcing from this factory. 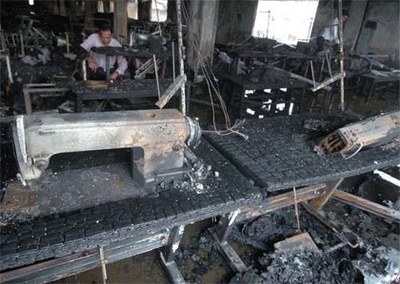 Please join us today in calling upon the brands, the employer and the government of Bangladesh to take immediate action to ensure justice for the victims, and to prevent these tragedies from occurring in the future. The death toll in the Bangladeshi garment industry since 2000 now stands at 230. Given widespread knowledge of the safety hazards in the garment factories in Dhaka, failure to act amounts to criminal negligence.

A government-authorized probe into the cause of the fire said the fire was started by an electric short-circuit on the second floor of the factory. It quickly spread to the other floors filled with inflammable materials such as wool threads and other goods. Lasting nearly two hours, the fire created a thick black smoke and consumed the oxygen in the air, suffocating the workers. The smoke could not escape because of poor ventilation and the presence of unauthorized sheet metal structures that were being used for storage of highly inflammable materials on the roof of the building. Workers could not escape because exits were locked and materials blocked the stairways. The factory’s fire-fighting equipment was "virtually useless", according to the Dhaka Fire Service and Civil Defence, and reportedly none of the security guards on duty knew how to operate fire extinguishers and hydrants.

On March 7, families of the deceased workers received 200.000 Taka (approximately 2085 Euro) in compensation. The injured workers have been admitted to several hospitals in the Dhaka area. There is no news yet about whether these first steps will be followed by further compensation measures, as 200.000 Taka is not sufficient. Further compensation is needed in the longer term for both the seriously injured workers and the families of the deceased workers. The factory will remain closed for the month of March. As of March 10, the Garib workers have received full payment of wages for the month of February (including the days after the fire broke out), but are awaiting further payment of wages for the remaining period the factory stays closed.

The Clean Clothes Campaign has contacted European and US garment companies that reportedly sourced from Garib & Garib Sweater Ltd. The Swedish H&M responded to the CCC that they are working together with another current buyer, the Italian company Teddy who owns the brand Terranova, on compensation of the injured workers and the families of the deceased. We welcome the first steps taken by these companies to respond to the needs of the workers and their families, and urge all buyers to ensure a longer term approach is taken regarding financial compensation which involves unions and workers’ organisations.

The fact that H&M denies that structural safety problems existed at Garib & Garib is worrisome, however. They say that their October 2009 audit found there were clearly marked escape routes and emergency exits, as well as fire extinguishers.

The inadequacy of the audit system could not be more clearly demonstrated. It has been the criticism from the labour movement for the last decade that the audit system fails to detect lack of compliance on a day-to-day basis. Just ticking off the existence of escape routes does not help if stairways are blocked with materials. Likewise the availability of fire extinguishers is not enough when nobody is trained to use them. Involving workers in monitoring health and safety conditions therefore remains a fundamental prerequisite to ensure that incidents like this are prevented in the future.

In addition, given the repeated lethal incidents in the garment industry in Bangladesh, it is no longer defensible that audit reports detecting shortcomings in safety standards are kept private. The industry should become more transparent and accountable to the workers concerned, and disclose audit reports to workers’ unions, the government and other stakeholders involved.

Sadly, this fire was not only preventable, it was predictable, and therefore in no way can we call it an accident. Since 2000 the Clean Clothes Campaign and its Bangladeshi partner organisations have been calling for a review of all Bangladeshi garment factories following similar fatal accidents, all sharing the same hallmarks – including blocking of stairways with goods and materials, locking of factory gates, bad ventilation, missing or inappropriate fire extinguishing equipment and lack of personnel trained in emergency operations. However, to date neither the government, the Bangladesh Garment Manufacturers and Exporters Association (BGMEA) or the international buyers have taken sufficient steps to address the structural and systemic problems in the garment industry.

We therefore fully support the demands from Bangladeshi unions and workers’ organisations to the Garib & Garib owner, the government, the BGMEA and the international buyers ordering at Garib & Garib to:

In addition we call upon the government in particular to:

8. ensure a credible criminal investigation is conducted into the Garib & Garib fire and the apparent neglect of health & safety and emergency regulations, and ensure a swift arrest and judicial process for anyone whose actions or negligence contributed for this disaster; and

In addition we call upon the fashion companies ordering at Garib & Garib to:

10. publicly support these demands to the government, and ensure their implementation;

11. directly engage with the unions to ensure that follow up actions and compensation measures are effective.

Please take action now! Send letters to the owner of Garib & Garib Sweater Ltd, the government of Bangladesh, the BGMEA and international buyers H&M and Terranova.

I am shocked to hear about the fire at the Garib & Garib Sweater Ltd. factory, costing the lives of 21 workers and leaving another 50 workers injured. This is not an isolated incident. It echoes a number of similar fatal fires in the recent history of the Bangladesh garment industry.

I urgently call upon you to take immediate and transparent action to ensure that all victims receive medical support and just compensation, now and for the longer term. There should be an impartial investigation leading to the criminal persecution of anyone whose actions or negligence contributed for this disaster. Finally I urge you to take action to prevent future disasters from happening, including the revision of existing health and safety regulations for the garment industry in Bangladesh.

I strongly believe that if you are really serious about preventing future deaths you must immediately start involving workers in monitoring health and safety standards. This can only be done through supporting the right to organise and working directly with trade unions.