by geertjan — last modified 2013-04-24 09:51
Good News for the New Year! After nearly five years in prison, two innocent men who were convicted of killing Chea Vichea, then president of the Free Trade Union of the Workers of the Kingdom of Cambodia (FTUWKC), have been provisionally released from prison pending a retrial. 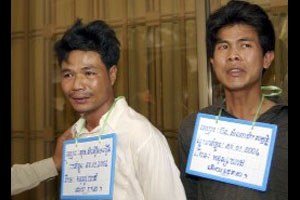 Born Samnang and Sok Sam Oeun were sentenced to 20 years imprisonment after a deeply flawed criminal investigation followed by an unfair trial on 1 August 2005.

Born Samnang and Sok Samoeun were tried and sentenced to 20 years in prison shortly after Vichea's murder. But the investigation and court hearings were denounced by then Special Representative of the United Nations' Secretary General for Human Rights in Cambodia as lacking any credibility. Investigations by local NGOs revealed that the two had alibis and were not near the crime scene.

In its decision on December 31, 2008, the Supreme Court cited unclear evidence and called for a new investigation into the case. The Clean Clothes Campaign applauds the Supreme Court for paving the way to a just resolution of the case.

The Clean Clothes Campaign thanks you for taking action and wishes you a peaceful, healthy and happy 2009.