by geertjan — last modified 2013-04-24 15:45
On April 12 the Cambodian Court of Appeals upheld the convictions of Born Samnang and Sok Samoeun for the 2004 murder of Free Trade Union of the Kingdom of Cambodia (FTUWKC) leader Chea Vichea. The FTUWKC maintains that these men are not the killers of Chea Vichea and that their detention is unjust. The union has appealed to the International Labour Organization (ILO) to establish an international committee to investigate and bring to justice the real killers of Chea Vichea, as well as those responsible for the murders of FTUWKC leaders Ros Sovannareth and Hy Vuthy. 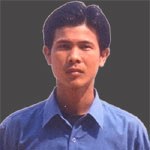 As the report below from the Asian Human Rights Commission makes clear the recent appeals court proceedings - held early in the morning for just a few minutes --were flawed and highly irregular. Yash Ghai, the United Nation's special representative for human rights in Cambodia expressed "deep regret" over the court's decision, reiterating earlier calls for a thorough, impartial and credible investigation into Chea Vichea's murder and for the prosecution of those responsible (to read his complete statement, click here. The ILO also immediately voiced concerns about the court's decision.

We hope that you will join us in continuing action to push for a just resolution to this case. Please add your name to the CCC's online petition to the Cambodian government to call for a new investigation into the murder of Chea Vichea.

In its final verdict, the Court of Appeals upheld the Municipal Court's verdict of August 2005, in which the two accused had been sentenced to 20 years imprisonment. The Court hurried to announce the final verdict before even 7:30 a.m. and the hearings were not fair and reasonable. Born Samnang and Sok Samoeun were arrested just one week after the murder of Chea Vichea, and rights groups and lawyers have been criticizing their prosecution and unfair trial in the Municipal Court, despite a lack of evidence and witnesses.

DETAILS OF COURT PROCEEDINGS:
On 6 April 2007, the Court of Appeals held a hearing in the murder case of Chea Vichea. The two accused men, Born Samnang, 25, and Sok Sam Oeun, 38, appeared before the Appeals Court. After the cross-examining the two men and witnesses, the Appeal Court prosecutor Pan Kim Heng requested Judge Saly Theara to order a re-investigation into Chea Vichea's murder due to a serious procedural lapse caused by the incompetent previous police investigation. The appeal judge Saly Theara then delayed the sentencing until April 12 and announced that the final hearing would begin at 7:30am. However, suspicions arose that the Court deliberately chose April 12 for sentencing to minimise reactions to its verdict when Cambodians are busy celebrating their new year.

On April 12, not surprisingly, the Appeals Court began its final hearing at 7:20 a.m. even before the posted time of 7:30 a.m. The final hearing was also conducted in the absence of the two defendants and their defense lawyers. Judge Saly Theara took only moments to uphold the August 2005 sentence against Born Samnang, and Sok Sam Oeun, for the January 2004 shooting death of Chea Vichea.

Fewer people from the media and human rights groups were present at the hearing as it was held too early and finished quickly by 7:40 in the morning. The Appeals Court has never conducted a hearing at such early time before or in such a rushed manner.

The AHRC has learned that appeal judge Saly Theara rejected all of the defence witnesses as well as the appeal court prosecutor's request for re-investigation. The appeal judge Saly Theara said in the hearing that evidence given by Sok Sam Oeun's witnesses lacks relevant facts. He also rejected the evidence given by Meng Hourt because he is not an official witness as he did not vow before court.

According to the report from our observer, who closely monitored the appeal court hearing, during the hearing, the appeal court did not bring the prosecution witnesses for the hearing at all. Also, the Phnom Penh police officers allegedly asked for Born Samnang's photo from his sister, named Bon Srey Na, before his arrest and during the appeal hearing on 6 April 2007, Born Samnang raised the issue of being tortured at the police station to force him to confess.

The appeal court also did not bring Mr. Heng Pov who is the ex-Phnom Penh police chief and the police officer named Ly Rasy who worked under supervision of Heng Pov and allegedly tortured Bon Samnang and Sok Sam Oeun despite the fact that there are very important to the case.

The appeal judge did not also accept Ms. Va Sothy's statement issued on 10 August 2006 from Thailand, who was an eyewitness and who saw the perpetrators very clearly because she also had not taken a vow before the court. The appeal judge ignored the appeal court prosecutor's request for reinvestigation in order to seek out the real perpetrators. It is believed that the decision of the judge was politically motivated.

According to Chom Sovannaly who is Born Samnang's lawyer, it was procedurally wrong that the appeal should have been decided in the absence of the defendants who had the right to be present.

The AHRC strongly urges the Cambodian authorities as well as the international community to immediately intervene into this matter to bring independent and effective re-investigation into the murder of Chea Vichea so that the real murderers are brought to justice. Born Samnang and Sok Sam Oeun should be given a chance for re-trial and released without delay, unless there is sufficient evidence to bring charges against them.

To read the full report from AHRC and send protest letters from their website, follow this link.

On January 22 Chea Vichea, the president of the Free Trade Union of Workers of the Kingdom of Cambodia (FTUWKC), which organizes garment workers, was shot dead in Phnom Penh.