by geertjan — last modified 2013-04-29 10:04
Twenty-three people were reported dead and approximately 350 others trapped, under debris after a nine-story factory building in Bangladesh collapsed early Monday morning. 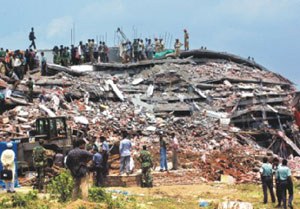 Latest reports are that 89 people were pulled out alive from underneath the rubble of the building, located in the industrial town of Savar, about 30 km northwest of Dhaka. The building housed Spectrum Sweater Industries Ltd. and Shahriar Fabrics. At the time of the collapse, approximately 00:45 a.m. on April 11 some 450 workers were reportedly working the night shift on three floors of the building, according to The Daily Star.

The Clean Clothes Campaign has received reports that production at the facility had been carried out for large international buyers headquartered in Spain and France. Garments produced at the factory were reportedly exported mainly to the United States, Belgium and Germany. The CCC is working with local organizations to follow-up on these reports and will keep the network updated on any new information as it is received. In the meantime, the CCC calls upon any companies that have worked with this facility to immediately take steps to ensure that rescuers have all the resources needed to speed up their efforts to extract workers who are still alive from the debris. Those involved in the rescue (Army, fire department, and Rapid Action Battalion) told The Daily Star that they have insufficient equipment and experience to deal with an emergency of this magnitude.

Rescue efforts are expected to take at least a couple of days. Last night oxygen was reportedly being pumped into the wreckage to help those trapped to continue to breath. At that time their weak voices could still be heard by rescuers.

Bangladesh Prime Minister Khaleda Zia visited the scene at Monday afternoon to see the rescue operation and to console the victims' families. Relatives of the trapped workers reportedly undertook rescue efforts themselves, with their bare hands, until officials took steps to seal off the site to allow better access for rescue equipment and personnel to wreckage. Dozens of relatives reportedly remain at the scene anxiously awaiting news. Throughout this emergency there have been reports of trapped garment workers phoning relatives on cell phones.

The office of the building's owner, Shahriar Sayeed Hossain, issued a statement late Monday saying the victims would be compensated, Reuters reported.

Local authorities told journalists that the building, built just three years ago, was structurely unsound, reportedly not properly designed, and constructed in a faulty manner using materials not suited for a nine-storey building. Reuters news service reports that the building was erected on marshland without permission. The exact cause of the collapse is still being investigated: some sources report that the explosion of a boiler on the ground floor triggered the collapse; others allege that the collapse was already underway when the boiler exploded. The Dhaka Development Authority has formed an inquiry committee to determine the cause of the collapse and establish who was to blame, according to Reuters.

Substandard facilities is a well-known and common problem in the garment and textile industry in Bangladesh and urgently needs attention. Only last january more then 20 workers perished at a garment factory near Dhaka following a fire. CCC has long called upon the BGMEA and BKMEA and the international garment industry sourcing in Bangladesh to take steps to improve conditions at facilities in Bangladesh.

CCC will continue to work over the next days with local and international union and NGO partners to clarify demands on next steps concerning full and independent investigation, full disclosure of the workers and victims, appropriate compensation and structural preventative measures.