by geertjan — last modified 2013-04-24 09:51
Please take action to support union demands in the wake of another garment factory tragedy occurred in Bangladesh. On May 3rd nine women were trampled to death and 50 others injured when they ran for their lives after a false fire alarm, at a building housing several garment factories in Bangladesh. 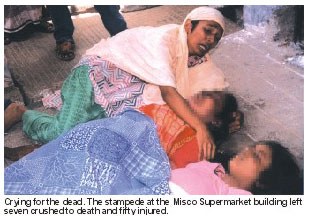 May 3rd started out as any normal workday for an estimated 3,000 to 5,000 workers from five garment factories jam-packed in the Misco Supermarket complex in Dhaka, Bangladesh. A couple of hours later a transformer near the building burst and sparks could be seen flying in all directions. A fire broke out in the very busy alley outside the factory where a religious program took place. Workers thought there was a fire in the factory and made a run for the narrow stairway, while some workers went through the emergency exits located behind the building. Most of them rushed through the main stairway where they found the gate locked. This caused the death of nine young women who were trampled to death in the ensuing stampede. Fifty others were injured.

The disaster took place at a time when at least on paper most factories claim to adhere to safety directives set out by the BGMEA. The BGMEA list of safety measures each garment factory must adhere to include fire drills and minimum safety measures like keeping fire extinguishers and training fire fighting teams. The BGMEA claims to have a safety cell with a monitoring team that provides training to factory staff and workers on fire safety methods and regularly inspects factories. But despite these measures workers who tried to flee from the Misco Supermarket complex found the gate locked and nine workers were crushed to death.

The BGMEA has taken the above measures after several tragedies over the last years in which workers died needlessly. Obviously the measures taken by the BGMEA are far from sufficient. Many garment factories are using buildings that are primarily built either for residential or commercial use. Landlords and factory owners just break down walls to turn a building into a garment factory. The Building Construction Rules 1996, which were enacted eight years ago are also quite vague.

The National Garment Workers Federation (NGWF) brought out a mourning procession in the city and held a rally where speakers blamed negligence of the garment authorities. According to the NGWF there were no arrangements for emergency exits or fire extinguishing equipment at the factory building.

The BGMEA president said that the association would give 100,000 Taka to the families of each of the victims of the Misco tragedy.

The Bangladesh Textile and Garment Workers League is demanding that: