by geertjan — last modified 2013-04-24 09:51
Another tragedy occured last week (august 8 2001) as 24 workers died in a stampede following a fire alarm. Please find below the press release send out by the ITGLWF. We are trying to find out for whom and to which countries the company was producing. All information on this is welcome! 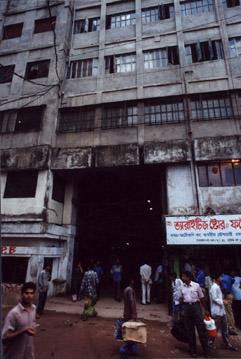 The factory is sometimes also called "Macro Sweater". The building housed 4 garment companies, another factory was called "Europa Garments". A condolence and protest meeting was held in Dhaka last friday.

Brussels, August 15 2001: Bangladesh’s garment industry has claimed another twenty four lives following a factory fire in Dhaka last Wednesday, bringing to 84 the number of lives lost in factory fires in the sector over the past twelve months. According to international labour leader Neil Kearney, these deaths are nothing short of murder, caused by the government’s failure to implement health and safety standards. He also blamed the companies who profit from sweatshop conditions.

The tragedy occurred on the morning of August 8, in Dhaka’s Mirpur area. At 9 am, a worker at Mico Sweater Ltd., on the seventh floor of the building, sounded the alarm after seeing flames shooting from the electric circuit board. Workers from five different units converged on the stairs, but found the single exit locked, and the security guard absent. In the resulting stampede, twenty four workers died and over one hundred were injured.

"This is the third accident of its kind in the past year that has occurred in an unsafe building. How many more workers have to die before the government takes action to stamp out the lawlessness in the industry ?" demands Kearney, General Secretary of the Brussels-based International Textile Garment and Leather Workers Federation.

The latest tragedy comes nine months after the Chowdhury factory fire which claimed 48 lives, and less than a year after the fire at Globe Knitting which left 12 dead.

In a letter to Prime Minister Sheikh Hasina Wajed, Kearney urged the government to take steps to investigate the disaster, to bring to justice those responsible and to ensure that full compensation is paid to the victims and their families. He said company owners and directors should be held personally liable and criminal charges should be brought against them. In addition, they should be forced to pay exemplary compensation to the families of those who died and to those injured. In the short term, the government should advance funds to the injured and the families of the deceased until compensation can be secured from the owners.

Kearney further urged the government to launch a programme to clean up the industry and to ensure that every employer in Bangladesh respects the law and provides safe and healthy working conditions.