The International Accord on Safety

Health and safety of garment workers in Pakistan

While the collapse of the Rana Plaza factory in Bangladesh in 2013 led to decisive, binding and transparent action by brands to make factories safe in Pakistan, very little changed since the deadly Ali Enterprises fire of 2012. The Safety Accord, which was established to make factories safer in Bangladesh after the Rana Plaza collapse, is now expanding its coverage. Pakistani unions and labour groups are campaigning for Pakistan to be the first country to expand to.

There have been no noticeable improvements to the monitoring and remediating of safety issues in garment and textile factories in Pakistan since the Ali Enterprises fire of 2012 in which over 250 workers died.

State inspectorates don't have the capacity or resources to cover this extensive industry, while the private and business-led auditing systems that brands rely on are opaque and have failed again and again the expose and fix major safety risks.

Unions and labour groups in Pakistan already in 2018 came to an obvious conclusion: Pakistan needs a transparent, binding, and credible safety system in which worker representatives have a voice to finally make factories safer.

Unions & labour groups call for an Accord

Unions and labour groups have been coming together since 2017 to discuss what factory safety in Pakistan should look like and what form an Accord in Pakistan could take. A 2019 report written by CCC network members and partners in and beyond Pakistan makes the case for expanding Accord operations to Pakistan and includes several resolutions showing the consensus in Pakistan's union and labour rights groups about this solution. Find out more about the Accord in our Q&A.

- The News, Pakistan needs an Accord to ensure workplace safety // International partners, 5 September 2021

- Remake, What's next for the International Accord, 29 September 2021

Workers continue to risk their lives at work

Since then, unfortunately more workers have died in incidents in factories in Pakistan, and there were many more narrow escapes where factories caught fire beyond working hours.

We are urging all brands sourcing from these factories to turn to the Accord to organise an independent investigation into the events and for all brands that have not yet signed the Accord, to do so.

24 January 2022: 11 workers are injured in a gas explosion at NP Cotton Mills in Hub (Balochistan) after the factory tries to get access to gas despite a cut-off

18 January 2022: 5 workers are killed when a bus used by the factory runs into workers standing outside the gates of the Interloop factory after its brakes fail

30 December 2021: Fire in a factory in a garment Lahore, no casualties

28 December 2021: It takes 5 hours to extinguish a fire in the Ayub Apparel factory in Karachi, the fire happened before working hours, so no casualties

26 December 2021: A fire breaks out in the BM Luggage factory in Karachi, the factory was still closed after 16 workers died in a fire in the factory in August.

Ahead of the 9th Ali Enterprises anniversary, unionists and labour activists held a media briefing discussing the legacy of the fire and what the International Accord could mean for Pakistan.

For the full list of speakers, please see the video description.﻿ 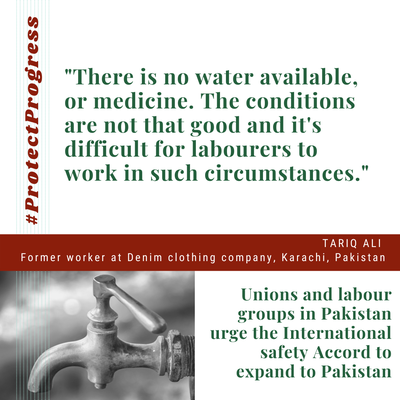