Read more on the full background to this campaign, and why Uniqlo should take more responsability 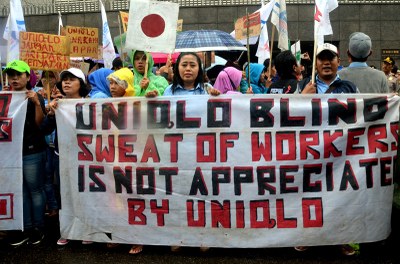 Global companies such as Uniqlo have long outsourced production in order to evade legal responsibility for the consequences of their own business practices. Over the last two decades civil society movements have refused to allow multinational companies to continue to profit from exploitation of workers and communities, whilst constantly refusing responsibility for the impact this exploitation has on communities and individuals. It was widely recognized that the power of multinationals to operate without borders left workers vulnerable to human rights abuses and there was a need to strengthen the protections that were available to them.

For this reason, over a decade ago, the UN member states unanimously passed the UN Guiding Principles on Business and Human Rights (UNGPs). The UNGPs states that it is the responsibility of international operating companies to ensure that human rights are respected in their supply chains, through active prevention and mitigation of adverse human rights impacts. This responsibility is independent of the actions of states and even applies if the company’s contribution to the impact was indirect. Importantly, the UNGPs establishes the responsibility of companies ¨exists over and above compliance with national laws and regulations protecting human rights.¨

Worker testimony and documentation retrieved from the factory verifies that Uniqlo was a very significant buyer from Jaba Garmindo, not only in terms of production volume but in terms of its influence over factory operations. For example, a 52-year-old worker who worked at the Jaba Garmindo factory for 22 years confirmed that she sewed thousands of Uniqlo garments and frequently was forced to work overtime in order for the factory to fulfill Uniqlo orders. Another worker recalled how Uniqlo orders always put significant strain on the workers, stating, “When we sewed Uniqlo products, we worked late, under pressure, were stressed out, and we came home late every day.¨

The long-standing and significant relationship between Uniqlo and the Jaba Garmindo factory is an indisputable fact. Uniqlo was able to dictate working patterns in the factory and place demands that directly led to increased workplace stress, excessive overtime, and high targets. This demonstrates that it did have, and was willing to use, leverage over its supplier to dictate operational methods. There is no justification in arguing that similar leverage could not have been used to dictate working conditions. According to international standards, therefore, Uniqlo retained a clear responsibility to prevent, address, and mitigate adverse human rights impacts for the workers at the Jaba Garmindo factory, both while it was sourcing at the factory and at the point it made the decision to leave. It failed to meet these obligations.

The right to severance payments in circumstances of mass terminations is recognized both within international labour conventions and under Indonesian law. The risk that workers will be deprived of this right in cases of factory bankruptcy is well recognized. It is for this reason that multinational enterprises are expected to assess the risk that any withdrawal of business may have to ongoing operations of their supplier, and attempt to address potential negative aspects prior to withdrawal. Uniqlo has yet to provide any evidence that the necessary steps were taken to mitigate the significant adverse effects of its withdrawal. For example, the recognised unions at the factory—of whose existence Uniqlo was more than aware—were never notified about Uniqlo´s decision to end their relationship with the factory, a decision that took place just two months prior to the collapse of Jaba Garmindo.

Now we are asking for Uniqlo to take responsibility for their failure to prevent the labour rights violations at Jaba Garmindo and to ensure that the consequences of those failures are not borne by workers who spent years of their working lives creating profit for the factory and its buyers.

It is important to note that what is being asked of Uniqlo is not new or unusual. In fact many of Uniqlo’s competitors have agreed to contribute to the payment of severance claims in cases where a supplier went bankrupt. Nike, adidas, Disney, Fruit of the Loom, Hanesbrands, H&M, Walmart, and Jack Wolfskin have all taken active steps in previous cases to ensure that workers received compensation they were owed. These buyers either directly provided the funds owed to workers themselves, or pressed their supply chain partners (factory owners, buying agents, etc.) to do so, so that the workers received the sums that they were due under law.

Uniqlo’s online response to our demands has been ultimately inadequate.

In its statement, Uniqlo claims that “the company has offered to work with the relevant parties to facilitate re-employment for any workers who remain unemployed.” We consider this to be a misleading statement that does not reflect the facts.

In June 2017, Uniqlo did request ILO Better Work’s Indonesia office to host a meeting between Uniqlo staff and representatives of the two unions representing Jaba Garmindo workers. The meeting was supposed to be the beginning of a process where a negotiated agreement could be developed that would address the violations raised by the union. In the meeting, Uniqlo made clear that in fact it had no intention of negotiating, but was there merely to collect and share information. They agreed that a follow-up meeting would be held where next steps forward would be discussed.

The promised second meeting never materialized, despite numerous requests from the union for a date to be identified. Instead, Uniqlo sent a single email to the union stating that:

We are considering whether there is any reasonable action we might take to help facilitate their re-employment. To help us evaluate what’s possible, we hope you may be able to share with us some additional detail about the situation for these specific workers.

The union considered this response to be inadequate on a number of levels. Firstly, the proposal does nothing to address the actual violation that the workers are seeking remedy for. Even if such a re-employment scheme would be feasible—and previous experience in these cases suggests it would not—workers would still be owed $5.5 million. It is important to reiterate: what is being requested of Uniqlo is not humanitarian assistance, but rather action to rectify a violation of rights. The Jaba Garmindo workers do not want charity; they want respect and to finally receive the money that is owed to them for making Uniqlo clothes.

Secondly, it is doubtful that even if a re-employment scheme were to go ahead that Uniqlo would be able to find work for 2000 workers at supplier factories based within a reasonable distance of where the workers live. It is also unclear whether Uniqlo intends to compel their suppliers to employ workers who are, on the whole, older and who are now known to be ex-Jaba Garmindo workers. Previous attempts to set up alternative re-employment schemes in Indonesia and Bangladesh have ended up as glorified job fairs, with workers merely being provided with a list of local factories where they might inquire.

Jaba Garmindo workers are not unemployed because they don’t know how to look for work. They are unemployed because of the illegal closure of their factory, lack of local alternative employment, and structural discrimination against workers who are older or who have dared to stand up for their rights.

Thirdly, despite outlining their concerns with Uniqlo’s proposal, the union responded in October 2017 to ask for further clarification and, again, another meeting. Since that date, Uniqlo has refused to respond to their emails.

Uniqlo also claim that “Fast Retailing is currently leading talks with stakeholders across its industry about methods that might protect apparel industry workers from similar scenarios in the future.”

It is of course important for companies to learn lessons from past mistakes, and to use those lessons to push the industry to make the necessary changes. Uniqlo is somewhat vague in explaining exactly which stakeholders are involved in these talks. As a global network actively working in this field, we have been unable to identify who are involved in such conversations and where and when they are taking place. However, even if Uniqlo is genuinely taking work forward on this issue, it is not enough to simply learn from mistakes and move on. Those who continue to suffer from Uniqlo’s failures cannot simply be swept under the carpet and forgotten as collateral damage.

Jaba Garmindo workers will not be made whole unless Uniqlo steps up and uses their power and resources to ensure Jaba Garmindo workers are finally paid the money they are owed. To date Uniqlo’s disappointing response, full of old fashioned arguments debunked long ago, vague promises of change and tokenistic promises of charity sets them as a company far removed from the influential cutting edge brand as Uniqlo professes to be.