After protesting for higher wages, over 10,000 workers in Bangladesh were dismissed and thousands face criminal charges.

"Cases have been filed against 3,000 unidentified workers which has created panic. Many have opted to stop going back to work."

Great NEWS! After our outreach to seven brands whose supplier factories are complicit in the repression, now 14 out of 33 trumped up criminal cases against workers have been dropped. But your support remains needed for the remaining 3,500 workers still facing charges. 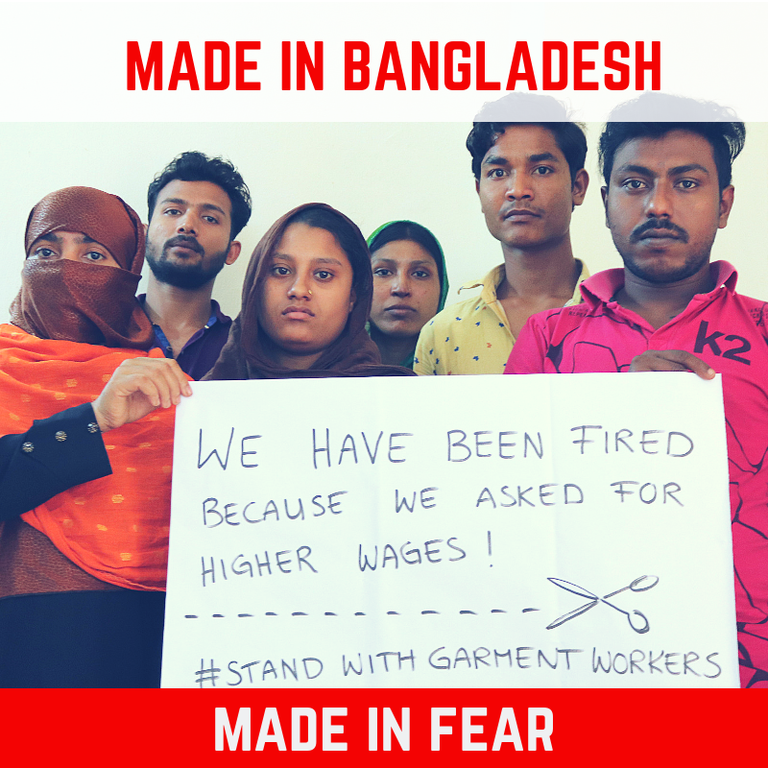 In December 2018, thousands of workers took to the streets in protest after the implementation of a wage revision turned out to have significantly different impacts for workers depending on their pay grade, with some receiving what amounts to just a few cents more.

The long-awaited minimum wage hike came after a lengthy, highly problematic process, which lacked adequate representation of workers’ voices. As a result, the wage revision amounted to only half of the workers’ unified demand.

It falls far short of any credible calculation of a living wage. After workers saw what the wage revision amounted to in their paychecks, thousands of them went on strike and organised massive protests. When during a January 2019 protest police in Dhaka started firing rubber bullets and tear gas into the crowd, one worker was killed and many others were injured.

Factory managers have fired over one thousand workers for participation in the protests. Dozens of workers, including union representatives, have been arrested and now face trumped-up charges that could lead to lengthy prison sentences, including life imprisonment.

This adds to the many charges against worker representatives that are still pending since the 2016-2017 protests for higher wages. Workers Rights Consortium has thoroughly researched the repression in their report Banning Hope.

All brands sourcing from Bangladesh need to check whether this repression is also happening in their supply chain. We urge all brands whose suppliers have taken part in the repression to press their suppliers to drop all charges, rehire all dismissed workers with back wages, immediately end worker dismissals and blacklisting, and express their strong concerns about this crackdown on workers’ rights and organizing to the Government of Bangladesh, the Bangladesh Garment Manufacturers’ and Exporters Association (BGMEA), and publicly.

What can you do?

Have a look at this brand tracker to see whether your favourite brand is complicit in the repression and what they have done to address the issue. Use the social media links in the brand tracker to tell the brands:

“The workers that stitch your clothes in Bangladesh were fired and threatened with jail just for standing up for higher wages. Do right by your workers: ensure your supplier factories rehire them with back pay and drop the charges. laborrights.org/2019crackdown #FreedomSafetyLivingWage”

If you want to do more you can go through your closet and find a garment made in Bangladesh or make your own sign showing your support for garment workers in Bangladesh. Take a picture and post it with a message showing your solidarity and tagging your favourite brands. Your message could be for example:

“I stand with the workers in #Bangladesh that stitched my clothes. They have a right to living wages, safe factories and freedom from repression. Read more on laborrights.org/2019crackdown #FreedomSafetyLivingWage”

These protests and the ensuing repression do not stand alone. The protests took place against the background of the unresolved Ashulia crisis of 2016 and a generally dire situation for freedom of association in the country. In 2016, wage protests in Ashulia led to a week-long shutdown of dozens of factories, over 1,500 workers being sacked, about 30 workers and union leaders being arrested and roughly 50 union leaders going into hiding. Many union representatives still have outstanding charges against them, which leaves them at constant risk of arrest.

The Bangladeshi government ignored calls for a wage increase in 2016. During the lengthy wage revision process of 2018 the government failed to take into account the unified workers’ demand for 16,000 taka. The new minimum wage for the lowest skilled workers amounted to only half of that: 8,000 taka (about 85 EUR). For the majority of the workforce the new revisions hardly raised the base wage at all. At the same time, factories are taking measures against workers to mitigate the effect of the presumed wage increase.

Despite a climate of fear and intimidation beyond the already limited freedom of association in Bangladesh, especially ahead of the 30 December national elections, workers and unionists repeatedly voiced their discontent during the revision process and from the time of the minimum wage announcement.

During the wage revision process, Clean Clothes Campaign requested international brands and retailers to publicly support workers’ wage demands. A range of brands did express hope for a fair minimum wage revision in which workers’ voices would be heard, but the brands failed to support a specific amount. Since the announcement and implementation of a minimum wage significantly below any workers’ demands and any living wage assessments these brands have failed to speak up.

Although the government of Bangladesh has repeatedly made international commitments to improve the situation for worker organizing in the country, recent amendments to the law do little to address national and international concerns. Freedom of association remains severely curtailed, which hampers expression of worker interests.

An early highlight of our campaign was the week of solidarity from 28 January to 3 February 2019 during which we took our concern about labour and human rights violations in Bangladesh to Bangladeshi embassies and consulates in a range of countries, showing that #WeStandWithGarmentWorkers.

We kicked off the week of action with a statement and it was followed by demonstrations, online action and protest letters from Hong Kong to Finland and Canada to Switzerland. Protest letters to Bangladeshi diplomatic representations were sent by CCC members, trade unions and/or other labour organizations in Edinburgh, Helsinki, Hong Kong, Oslo, Ottawa (separate letters by USW, OSSTF/FEESO, PSAC-AFPC), Oulo, Stockholm, Rome, Tampere and were handed over during actions in front of embassies and consulates in Berlin, Brussels, Geneva, London, New York, The Hague and Washington DC.

Online, supporters shared pictures of their clothes made in Bangladesh or found other creative ways to show their solidarity.