As the five-year anniversary of the world’s deadliest manufacturing tragedy – the collapse of the Rana Plaza building in Bangladesh – approaches, it is important to take stock of the reforms that have been put in place. Moreover, it is a moment for global apparel brands to ensure those reforms become the new normal for garment manufacturing in Bangladesh, with the Bangladesh Accord as the best example.

After the horrific April 24, 2013, Rana Plaza collapse, which killed 1,134 workers, two global unions and eight Bangladeshi unions negotiated an enforceable agreement with a group of apparel brands and retailers. As a result of pressure from shareholders, trade unionists, and activists, additional companies signed onto the agreement over the coming months and years. Today, the Accord counts 220 international apparel companies as members. Its independent inspections have made working conditions safer in 1,600 factories, employing a total of two million workers.

The original Accord, founded on May 13, 2013, now nears the end of its five-year program. That, however, does not mean that its work is complete or will come to an end. A renewed Accord has been agreed upon by the same stakeholders, which will take effect after the end of the current Accord and run for another three years. A coalition of organizations is encouraging the signatory companies, as well as companies that never signed, to commit to this 2018 Accord. More than half of the companies (124) have already agreed. In addition, six companies that had not joined the original Accord have now signed the 2018 Accord.

Unfortunately, some companies have refused to sign. One common reason that companies have cited is that they believe their supplier factories are nearly all the way safe.

The final remaining renovations can save lives

Indeed, many factories are close to completing the repairs and renovations on the safety issues that the Accord uncovered. Analysis of the Accord’s corrective action plans, which are posted publicly on the Accord’s website for each individual factory, and updated regularly, does show that some companies are at above a 90% completion rate on the mandated structural, electrical, and fire safety repairs and renovations. Overall, the Accord reports an 84% remediation rate on safety issues identified during initial inspections. But even those brands whose suppliers have finished almost all renovations should not think lightly about the remaining ones.

The vast majority of the lagging renovations should have been fixed months or even years ago. These include changes that could save lives, such as the removal of lockable and collapsible gates – still an issue in several factories. In a factory with collapsible gates instead of fire-rated doors, smoke will engulf the workspaces during a fire. Even worse, if those gates are locked, then workers will be trapped, as was the case during the fire at Tazreen Fashions, which killed 112 workers.

Similarly worrying is the fact that 60% of the factories have yet to complete a full and proper installation of a fire detection and prevention system. Not being able to detect a fire early on hampers workers’ ability to escape a burning building. This was shown recently in an alarming simulation created by Forensic Architecture of the 2012 Ali Enterprises fire in Pakistan, which shows how a functioning fire detection system, fire-rated doors, and unlocked escape routes could have saves hundreds of lives.

Especially significant, in light of the critical issues highlighted by the Rana Plaza collapse, is the fact that 34% of the factories still lack a management load plan. Such a plan is essential to ensure that a multi-story factory is able to hold up all the floors and the weight of all the machinery and workers without risk of collapse.

Even if an apparel company has completed all safety repairs and renovations in its Bangladeshi supplier factories by May, it is still critical that the company joins the 2018 Accord. Ensuring safe factories is a continuous process, which does not finish at the moment that all corrective action plans are deemed carried out.

The reason for this is that money, still all too often, trumps safety in factories facing the global race to the bottom. If workers can no longer report safety concerns to the Accord, then management could easily revert to stacking boxes of finished product in hallways, which increases the time it takes to exit the building during an emergency. Factory owners wishing to save on ventilation and air conditioning cost could return to using collapsible gates instead of fire-proof doors. Most concerning, during a fire, management could again require workers to stay behind to try to save the product rather than immediately exiting the building to save themselves.

Given how effective the Accord has been – the sheer numbers of renovations made and workers and managers trained – and the urgent need to make reforms permanent, there is no viable reason for an apparel company that sources from Bangladesh to not immediately join the 2018 Accord. 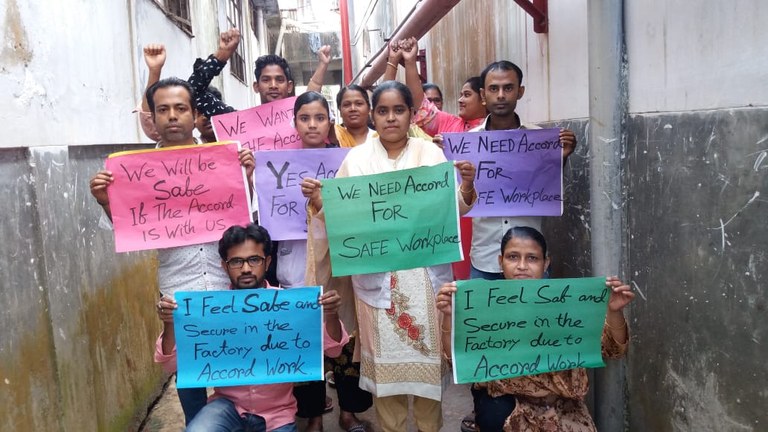