When ‘business as usual’ costs lives: workers in Pakistan call for a binding safety agreement

The global garment industry meets in Pakistan this week, giving them a golden opportunity to accept the lessons of the Ali Enterprises fire and take the first steps toward negotiating a safety agreement with workers’ groups. 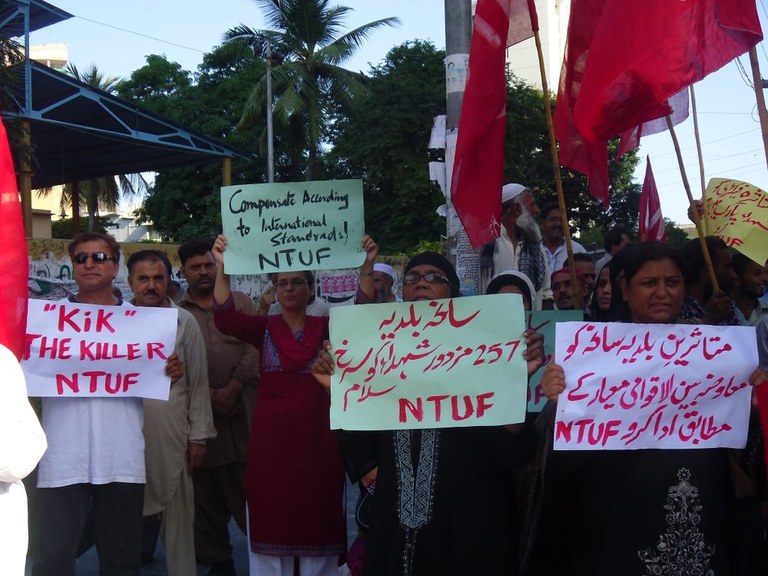 In Karachi, Pakistan, 11 September 2012 is ingrained into people’s minds as the day on which over 250 people did not return home to their families after a long day of work. A fire in the Ali Enterprises garment factory had spread rapidly, fed by the bales of finished product laying around, a stairwell that soon functioned as a chimney, and wooden structures inside the factory. Hundreds of workers were trapped in a building with barred windows, non-existent fire exits, and only one stairwell – filled with smoke. Many workers stood no chance of escaping from a building that was manifestly unsafe, even though it had been certified in the weeks prior to the tragedy.

This was the largest industrial incident in Pakistan’s history – and the deadliest fire in a garment factory anywhere – but it was not some freak accident. It was enabled by inadequate or absent national inspections, as well as a social auditing system that frequently fails to uncover safety violations and often falls short on addressing those that it cannot ignore. Factories and apparel companies continue to hide behind the false and too often fatal assurances created by an auditor visiting the factory and giving it his blessing.

This is a pervasive problem in the garment industry. Much more well known than the Ali Enterprises fire is the Rana Plaza collapse in Bangladesh which killed at least 1,134 workers. Factories in the Rana Plaza building had been visited by auditors in the months before the building would come crumbling down. Instead of noticing that extra floors were being constructed illegally and that the building – located on a drained swamp – had not been permitted by the correct authority in the first place, some auditors commented on the good building structure.

In the years since the Ali Enterprises fire, over 120 workers have died in factories in Pakistan due to unsafe conditions.

The outrage after this atrocity led to an unprecedented step by trade unions and apparel companies. Together they signed a legally binding and enforceable agreement that set up a credible and transparent programme to inspect factories, oversee remediation, train workers on safety, and provide a reliable and independent complaint mechanism. But while the Rana Plaza building collapse tipped the balance, the Accord on Fire and Building Safety in Bangladesh did not materialise overnight as it might appear. It was the culmination of two years of campaigning and negotiations by unions and NGOs prior to the collapse, who for years had been aware of the dire safety situation in garment factories in Bangladesh and the lack of impact of commercial audits.

Despite tragedy, business continues as usual in Pakistan

In Pakistan, no such system emerged. Instead, apparel companies, factory owners, and social auditing firms continued their business as usual. In the years since the Ali Enterprises fire, over 120 workers have died in factories in Pakistan due to unsafe conditions. The fact that no other mass tragedy at the same scale has occurred is the result of sheer luck, rather than of active policy. Although many actors involved in the garment industry in Pakistan have realised that the lack of safety in the factories need to be addressed, they have not yet facilitated the needed changes.

For example, the Pakistan Buyers’ Forum – a business-driven coalition with sustainability ambitions set up in 2014 by the International Labour Organisation (ILO), International Finance Corporation, and the Netherlands’ Embassy in Pakistan – has recognised safety as a vital issue, but has not yet taken meaningful action. Life and Building Safety, set up by the Dutch sustainable trade initiative IDH and slated to begin operations in Pakistan next year, purports to have learned from the Bangladesh Accord, but it has yet to incorporate its most crucial elements: enforceability, independent inspections, market consequences, and worker involvement.

This last aspect is also the main problem of multiple other factory safety programmes in Pakistan: they fail to put workers – the beneficiaries – at the centre of the development and implementation.

Change course now, before the next tragedy

A coalition of unions and labour organisations in Pakistan is now calling for change. In the seven years since the Ali Enterprises fire, instead of learning from their mistakes, brands and retailers have continued to rely on the very same corporate auditing schemes that failed to prevent casualties in the past. The coalition of Pakistani unions and labour organisations is calling upon all companies sourcing apparel or textiles from Pakistan to instead work towards a legally-binding agreement with local and global unions and labour rights groups. This would be based upon the Bangladesh Accord and would complement rather than replace continued capacity building of labour inspectorates.

Safety would become a joint responsibility through such an agreement, actively shared by the apparel companies who, through their purchasing practices, exercise immense influence over the conditions in Pakistani factories. In order to create the incentive and financial feasibility for factories to undergo safety renovations, brands and retailers must negotiate prices for garments that ensure that factories can afford to operate safely. They must also be held accountable for ensuring progress on building renovations and repairs.

It is high time that apparel companies draw a belated lesson from a preventable tragedy and follow the call of those who know best. If brands and retailers take action now, a safety agreement in which local unions and workers’ rights organisations are central to the conceptualisation, design, governance, and implementation could be in operation by the end of next year.

Saving lives cannot wait, it is time to act. On 12-13 November, apparel companies and other stakeholders in the garment industry are gathering in Lahore for the International Apparel Federation’s World Fashion Convention. This would be an excellent opportunity for companies, with the Ali Enterprises tragedy in mind, to reach out to unions and labour rights groups in Pakistan, as well to each other, to together take the first steps towards a Pakistan Accord.

Read more about safety in garment factories in Pakistan, the initiatives that failed to address the unsafe workplaces, and the proposal of Pakistani unions and labour rights groups at www.laborrights.org/PakistanSafety.