Leicester is the UK’s garment hub, and 75% of city-wide production is for Boohoo, a brand valued at $4.3 billion. The brand has faced several allegations of workers’ rights violations over the years, with campaigners raising concerns that many of their cut-price clothes are produced under the conditions of modern slavery.

Last week saw the localised lockdown of the UK city Leicester amid a spike in COVID-19 cases, coinciding with the release of a report on lockdown breaches, furlough fraud and exploitative practices in Leicester-based garment factories producing for online fast fashion giant, Boohoo.

During a nationwide lockdown, factories supplying Boohoo kept production running at 100% capacity, forcing garment workers earning illegal pay - as low as £3.50 per hour - to continue working, whether they were symptomatic or not, according to a media investigation by the Sunday Times and a report based on worker interviews by Labour Behind the Label.

Poverty pay eradicates choice and the garment workers of Leicester simply could not afford to refuse. To limit attention to factory level, however, would be to let the drivers of these practices, the brands turning profits in the billions, off the hook.

In sacrificing workers’ rights at the altar of profit (and Boohoo’s shares went up 20% in the early days of COVID-19, even as other retailers took a hit), Boohoo may have played a part in the surge of COVID-19 cases in Leicester.

What’s vital here is that this case is not an aberration in the garment industry, bar the fact that it happened on UK soil. Distance should not be the measure for our concern over human rights abuses, especially if we are implicated in them as consumers.

Boohoo must be investigated and face repercussions, but so should the other high street brands currently acting with impunity. There is a moral hypocrisy in the news that brands including Next and Asos have dropped Boohoo, while doing little to challenge the violations within their own supply chains.

Reports show that Next is connected to a range of cases involving union busting and mass dismissals of workers, many with wages owed, in factories in India, Bangladesh and Cambodia, and that by early June, workers in the Eligant factory in Sri Lanka, supplying Asos, had received only 40% of their March wages and nothing since.

Boohoo and Leicester’s factories exemplify an unscrupulous industry. The return of Leicester as a garment hub in the UK is based firmly on the exploitative labour and purchasing practices of the global garment industry where brands see themselves as mere buyers from far-away factories.

The risks of the industry are pushed onto garment workers, yet they are excluded from the rewards. This situation has been compounded by COVID-19 as brands have responded by pulling orders and refusing to pay in full for those already produced. In March and April, the Arcadia Group (owners of Topshop, among others), cancelled orders for hundreds of thousands of items. By early May, Arcadia, headed by Sir Philip Green (who has a personal net worth of £2.2billion), had cancelled £16 million in orders in Bangladesh alone, and asked suppliers for a 30% discount on goods already shipped.

Its CEO Ian Grabiner told suppliers that “when we cancel an order, we are not responsible for the cost of the goods, the cost of any fabric, or any other cost at all.” With wages owing and future work uncertain, many garment workers now face the very real threat of starvation. Arcadia has not responded to the Clean Clothes Campaign's repeated demands for it to #PayUp and continues to put profit above the lives of garment workers.

Similarly, Edinburgh Woollen Mill, who own Peacocks, have cancelled £6.5 million in orders from Bangladesh alone, and requested a massive 70% discount on goods already shipped.

In no other industry that I know of, do companies have the unbridled power to pick and choose whether they pay for goods they have ordered and which have been made to their exact specifications. Many factory owners have been assured by brands that they will be met with “individual solutions,” however they have no means through which to make their buyers pay.

The conditions of the industry are intrinsically linked and fuelled by brands’ aggressive purchasing practices and, in their global race to the bottom on price, they hold all the power. Complex supply chains and a lack of transparency lets brands distance themselves from the people who make their clothes, the vast majority of whom are women. This allows them to deny culpability, and enables brands to cut and run from factories where abuses have been uncovered, as Boohoo is already threatening to do.

COVID-19 did not create the inequalities of the garment industry, but it is bringing them into the spotlight. Now brands and retailers must take responsibility for garment workers by safeguarding their rights and ensuring they continue to receive their wages during this crisis. Workers’ rights need to be central to any attempts at global recovery. This can only be achieved through binding legislation, holding brands to account through laws that end exploitation and protect garment workers’ rights. 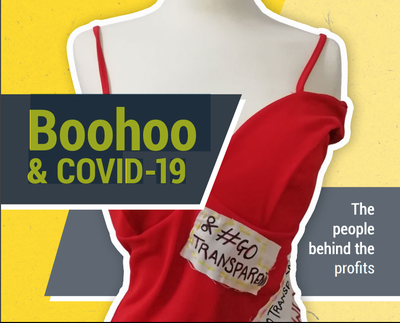