Garment workers cannot foot the bill for the pandemic

With shops closing and people staying at home, the pandemic has changed how we shop but also how garment workers live.

The order cancellations and lockdowns that followed the pandemic caused workers to be underpaid for their labour, or not be paid at all for months. As a labour rights activist from Pakistan, I see the consequences for workers every day.

During this crisis, major high street brands sourcing from Pakistan such as H&M, Primark, Walmart, C&A, and Bestseller (Vero Moda) have failed to protect their workers. Their billionaire owners have made fortunes from these workers’ low-paid labour, but are now leaving workers in the cold.

While in Pakistan the government instructed employers not to fire workers during the lockdown and to pay their wages in full, according to union estimates half a million garment and textile workers were left jobless only weeks into the pandemic. Very few workers were paid in full, despite availability of low interest loans to cover the costs. Factory owners know that there is hardly any risk in breaking labour law and felt little legal or moral pressure to pay their workers, especially as their buying brands cancelled orders. In April, garment workers received on average 75% less than before the pandemic according to a new Clean Clothes Campaign report. Dismissed workers received nothing at all, whilst others received considerable cuts to their already low wages. The total amount of wages lost by garment workers in Pakistan from March to May is an estimated $320.88 million.

For garment workers, who had been living hand to mouth already, unemployment and wage cuts triggered difficult choices between paying rent or feeding their families. Many were forced to rely on charity or take out loans. Government support was complicated to apply for and not available to all workers, especially as up to 85% of garment workers in Pakistan are never given formal employment contracts or registered with social security institutions.

Suneel Danish, who had been working in a Lahore garment factory producing clothes for international brands, told me that when the lockdown started, over a quarter of the workforce was laid off and paid only half of what they were owed. This forced Suneel to become indebted to his family and his landlord. Other workers, such as Ms. Nosheen, told me that the first workers to be fired were those that the factory considers to be troublemakers. She was only allowed to work and receive pay for half her normal hours and was forced to sell household items and take loans to get through the crisis. Although Ms. Nosheen is back at her job, Suneel is not. In absence of orders, many factories are still operating at reduced capacity and underpaying their workers, which means that the future is uncertain for workers like Suneel.

Supply chains, which concentrate money and power at the top, have a domino effect. As brands push costs down the supply chain, it is ultimately garment workers who fall hardest. Major brands responded to the pandemic by cancelling orders, which left factories without cash to pay workers. Garment workers were left to foot the bill. Clean Clothes Campaign estimates that the global wage gap for garment workers around the world is between $3.2 and $5.8 billion.

Brands and retailers must take swift action to ensure that the workers who enabled their profits receive the wages they are owed. As brands are responsible for structural inequalities in supply chains that have left garment workers in destitution, each brand must publicly commit to taking responsibility for workers’ wages. Brands should then work together to establish funds and take out loans if necessary to cover workers’ wages.

To ensure that workers are never again left so vulnerable in a crisis, brands must also enable workers to exercise their rights to organise in the factories that they source from. Brands have the power to ensure money flows into supply chains, and can use their leverage to make factories pay, however only collective worker action will lead to strengthened labour laws, which had been needed so desperately pandemic. 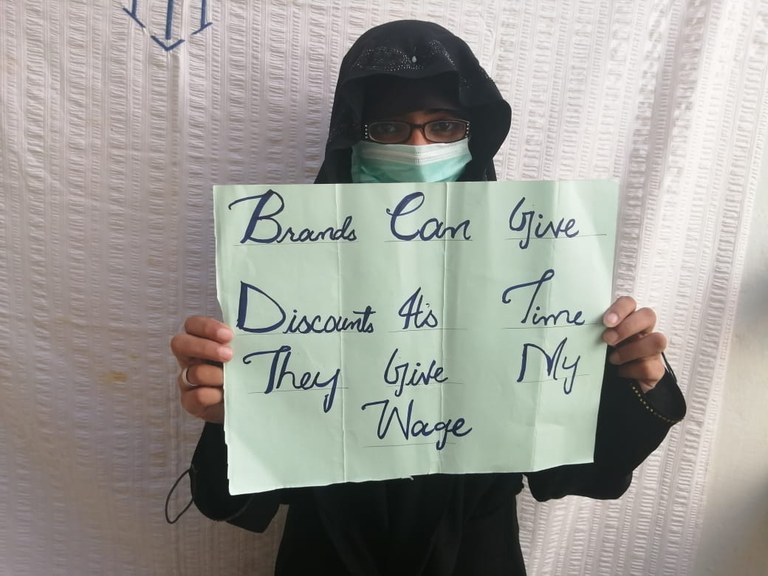