Dhaka fire shows that Bangladesh must build better safety systems, rather than scrap the Accord

On the night of 20th February a fire broke out and rapidly spread through the densely packed Chawkbazar district in Dhaka, Bangladesh. At least 70 people died in the fire, which was exacerbated by illegally stored, highly combustible chemicals in the buildings.

This horrible tragedy lays bare a pressing problem in Bangladesh: the use of residential buildings and areas for industrial purposes beyond the ready-made-garment industry, which creates serious safety hazards that remain unchecked by national safety enforcement systems.

As tragic as the fire is, it did not come as a surprise. The dangers of storing chemicals in residential areas has been widely acknowledged since a fire in 2010 killed 123 people, just a stone’s throw away from the site of the latest disaster. Promises to relocate chemical factories were not followed up.

This points to the issue that lies at the core of all of these tragedies: intentions can be good, but the implementation, monitoring, and enforcement of safety standards is arduous work that requires capacity -  and political will - to let safety trump factory owners’ interests in cutting corners and avoiding regulation.

Accord on Fire and Building Safety in Bangladesh

The contrast with the worldwide outcry after the 2012 Tazreen Fashions and 2013 Rana Plaza mass casualties in garment factories is striking. In those cases, under immense public pressure, unions, apparel brands, and NGOs agreed on a programme to fill existing gaps in safety enforcement.

It is this Accord on Fire and Building Safety in Bangladesh that many now turn to as an example. Civil engineering professor Ishtiaque Ahmed told Reuters that genuine safety monitoring, of the kind practiced by the Accord, could make a real difference:

“The only reason why fire accidents in the garment industry [have] decreased is because Accord has constantly monitored the factories since 2013. […] If there’s a strong team to monitor the housing industry, a lot of fire accidents can be controlled.”

Bangladeshi lawyer Sara Hossain, who represented victims of the 2010 fire, brought up the same example to the Wall Street Journal. Both she and the Bangladeshi fire department’s director general, Ali Ahmed Khan, point out that international pressure transformed industrial safety in the garment sector, but this change has failed to extend to other sectors.

In the almost six years since the Rana Plaza collapse, the Accord has brought unprecedented new safety levels to Bangladesh’s garment sector, even if a number of factories are still awaiting essential remediation measures.

Nevertheless, since early 2018, the Accord has been at risk of expulsion from Bangladesh, with both the government and factory owners claiming that Bangladesh’s inspection systems are ready to take over the Accord’s work.

More capacity needed to improve safety in other sectors

The national inspection agencies in Bangladesh would, however, better serve the people of Bangladesh if they decided to put their capacity where it is most needed: all those factories not covered by the Accord.

The Department of Inspections for Factories and Establishments (DIFE) lists 29,492 factories under its purview, 5,104 of which are garment factories.

Given the widely-held opinion that other sectors are lagging far behind the garment industry, (which has had five years to reach these results), the obvious conclusion is that it would be irresponsible to place more work on the shoulders of already overburdened institutions.

Rather than putting energy into attempts to gain control over the inspections for the almost 1,600 Accord-covered factories, DIFE should focus on the nearly 30,000 industrial facilities that need its attention much more urgently.

Boiler inspections pose a further example of how lack of capacity has continued to create unsafe situations. Despite Bangladesh’s long history of fatal boiler explosions, their inspection was explicitly left under the responsibility of the government of Bangladesh’s inspection agencies.

But with only eight boiler inspectors for the whole garment sector, these government inspectors have to limit themselves to short visits that do not allow for testing. All these inspectors do is check the paperwork.

The inadequacy of this practice was most recently demonstrated in July 2017 when a boiler exploded in the Multifabs factory, killing 13 workers and injuring 20.

Trying to fill this gap, the Accord has started a pilot study into boilers in 50 garment factories. It found that many factory owners used to the minimal inspection capacity flatly refused to let their boilers to be tested. The Accord could only test 19 out of 50 boilers, of which only five passed the test.

In a country rife with unsafe buildings, the Accord has shown what can be achieved through meticulous inspections, a commitment to remediation, and worker involvement.

With the immense task ahead of inspecting buildings beyond the garment industry, it would be foolish for the government to rush the transfer of responsibilities of the one safety programme that has brought substantial progress.
It would be a more thoughtful move to instead use the Accord’s initiative to lighten the government’s burden by allowing the Accord to continue the inspection and remediation of the garment factories, as well as the textile mills and factories and boilers, under the Accord’s 2018 mandate.

The Accord’s work could free up direly needed government capacity to improve the safety situation in chemical factories, non-Accord-covered garment factories, and other sectors.

This would also allow ample time for the government to create a genuine transition plan together with the Accord’s signatories for the time beyond the Accord’s 2021 mandate.

This would provide real solutions by incorporating the vital elements of the Accord’s model towards improving workplace safety: not just its inspections, but also the complaint mechanism and worker trainings.

In this way, the government would take responsibility for Bangladesh’s workers and residents and work towards sustainable safety for all. 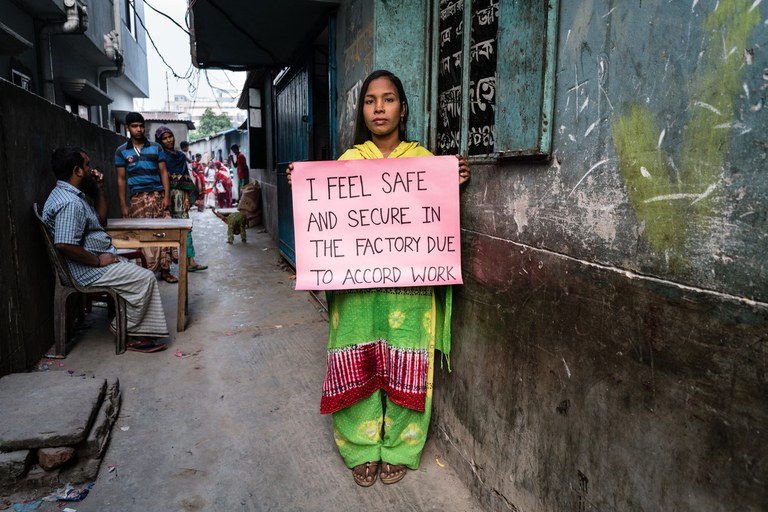